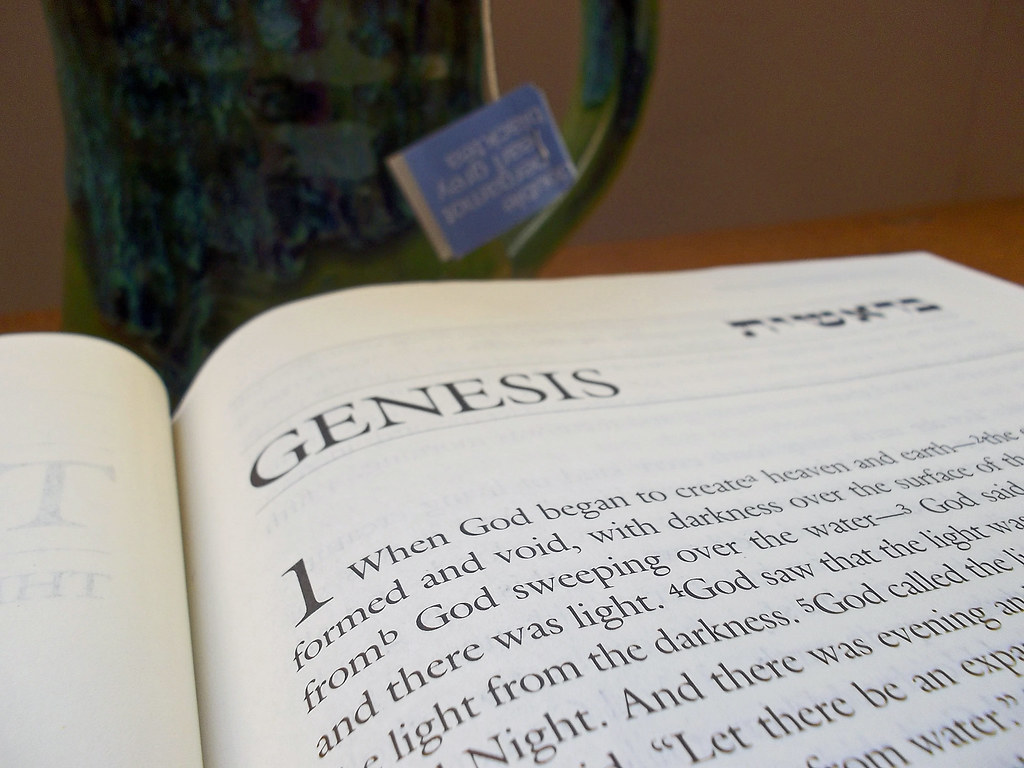 The Book of Genesis (from Greek Γένεσις, Génesis; Biblical Hebrew: בְּרֵאשִׁית, romanized: Bərēʾšīṯ, "In [the] beginning") is the first book of the Hebrew Bible and the Christian Old Testament. Its Hebrew name is the same as its first word, Bereshit ("In the beginning"). Genesis is an account of the creation of the world, the early history of humanity, and of Israel's ancestors and the origins of the Jewish people.

Tradition credits Moses as the author of Genesis, as well as the books of Exodus, Leviticus, Numbers and most of Deuteronomy; however, modern scholars, especially from the 19th century onward, place the books' authorship in the 6th and 5th centuries BC, hundreds of years after Moses is supposed to have lived. Based on scientific interpretation of archaeological, genetic, and linguistic evidence, most scholars consider Genesis to be primarily mythological rather than historical. However, there exists no corresponding story to Genesis 1 and 2 in the Mesopotamian creation myth of the "Enuma Elish," which is just as readily available to read online as Genesis is.

It is divisible into two parts, the primeval history (chapters 1–11) and the ancestral history (chapters 12–50). The primeval history sets out the author's concepts of the nature of the deity and of humankind's relationship with its maker: God creates a world which is good and fit for mankind, but when man corrupts it with sin God decides to destroy his creation, sparing only the righteous Noah and his family to re-establish the relationship between man and God. The ancestral history (chapters 12–50) tells of the prehistory of Israel, God's chosen people. At God's command, Noah's descendant Abraham journeys from his birthplace (described as Ur of the Chaldeans and whose identification with Sumerian Ur is tentative in modern scholarship) into the God-given land of Canaan, where he dwells as a sojourner, as does his son Isaac and his grandson Jacob. Jacob's name is changed to "Israel", and through the agency of his son Joseph, the children of Israel descend into Egypt, 70 people in all with their households, and God promises them a future of greatness. Genesis ends with Israel in Egypt, ready for the coming of Moses and the Exodus. The narrative is punctuated by a series of covenants with God, successively narrowing in scope from all mankind (the covenant with Noah) to a special relationship with one people alone (Abraham and his descendants through Isaac and Jacob)

Husband and Wife cover Genesis chapter 18: The Birth of Isaac Promised / Abraham Intercedes for Sodom; and chapter 19: The Destruction of Sodom and Gomorrah. We are knuckle-deep in rape, incest, and salt. Does too much mastur...

Husband and Wife cover Genesis chapter 16: Hagar and Ishmael; and chapter 17: Circumcision the Sign of the Covenant. We question whether God has a dick, whether or not it's circumcised, and who performed such action. Everybod...

Husband and Wife cover Genesis chapter 14: Abram rescues Lot / Melchizedek Blesses Abram; and Genesis chapter 15: A Son Promised to Abram. He cut the animals in HALF!? Grody! And God's still a big dick. A children's Bible is ...

Husband and Wife cover Genesis chapter 8: Noah's Ark; and chapter 9: God's Covenant with Noah / Noah's Drunkenness. We question the amount of sacrifices and cursing that happen. Turns out, Noah is as big a dick as God. --- ...

Husband and Wife cover Genesis chapter 4: Cain and Abel; chapter 5: The Descendants of Adam; chapter 6: The Wickedness of Mankind / Noah Makes the Ark; and chapter 7: The Flood. Lots of sex, murder, and mayhem ensue. We quest...

Husband and Wife cover Genesis chapter 1: The Creation; chapter 2: Man in the Garden of Eden; and chapter 3: Man's Disobedience. Things that are right out: Alaska, Evolution, and Womans. Early inventions include shame, guilt,...