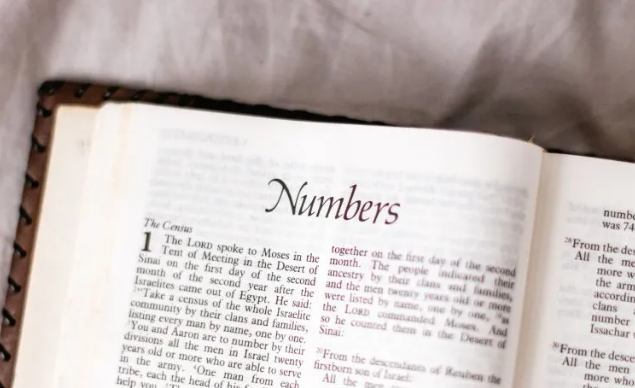 The book of Numbers (from Greek Ἀριθμοί, Arithmoi; Hebrew: בְּמִדְבַּר, Bəmīḏbar, "In the desert [of]") is the fourth book of the Hebrew Bible, and the fourth of five books of the Jewish Torah. The book has a long and complex history; its final form is possibly due to a Priestly redaction (i.e., editing) of a Yahwistic source made some time in the early Persian period (5th century BCE). The name of the book comes from the two censuses taken of the Israelites.

Numbers begins at Mount Sinai, where the Israelites have received their laws and covenant from God and God has taken up residence among them in the sanctuary. The task before them is to take possession of the Promised Land. The people are counted and preparations are made for resuming their march. The Israelites begin the journey, but they "grumble" at the hardships along the way, and about the authority of Moses and Aaron. For these acts, God destroys approximately 15,000 of them through various means. They arrive at the borders of Canaan and send spies into the land. Upon hearing the spies' fearful report concerning the conditions in Canaan, the Israelites refuse to take possession of it. God condemns them to death in the wilderness until a new generation can grow up and carry out the task. The book ends with the new generation of Israelites in the "plains of Moab" ready for the crossing of the Jordan River.

Husband and Wife cover a brief summary of the Book of Numbers, then bomb a super lengthy and horribly written quiz. We learn that those bozos actually hit the borders of the Promised Land twice! Un-freaking-believable! Thank ...

Husband and Wife cover questions about where the Promised Land sits, and which body of water is actually the Brook of Egypt. This lesson in geography was brought to you in part by the letters WTF. Thank you for stopping by Sa...

Husband and Wife cover questions about renaming towns, and speculate as to whether Reuben was being chintzy when it came to sacrifices. Like, where's the beef, my guy? Thank you for stopping by Sacrilegious Discourse - Bible ...

Husband and Wife cover Numbers chapter 32: Reuben, Gad, and Half of Manasseh Settle East of the Jordan; and chapter 33: The Stages of Israel's Journey / The Borders and Division of Canaan. Some folks get to stay where the gra...

Husband and Wife have a conversation about why Husband was giving Wife the stink-eye when she started going soft on atheism last week. They encourage everyone to practice Wheaton's Law ("Don't be a dick") and Wife sings the M...

Husband and Wife take a look back at what we've learned so far regarding podcasting in general and the Bible in particular. Then we look ahead at what Sacrilegious Discourse hopes to accomplish in the coming months. Have a ha...

Husband and Wife cover questions about Moabites versus Midianites. We also explain that putting mustard on your pumpkin pie is a result of poor life decisions, and that this personal choice is definitely not an Ohio thing. Th...

Husband and Wife cover Numbers chapter 30: The Law Concerning Vows; and chapter 31: Israel Takes Vengeance on Midian / The Division of the Booty. We (re)learn that women's silly little brains aren't capable of thought. This i...

Husband and Wife cover questions about the Bureau for Paranormal Research and Defense, as well as the practice of slaughtering lambs for sacrifice, which is apparently still a thing. Gross. Thank you for stopping by Sacrilegi...

Husband and Wife answer questions about Zelophehad's daughters, who may not have actually existed. We also talk about Pride and Prejudice, Fiddler on the Roof, the Angel of Death, and Batman. Because obviously. Thank you for ...

Husband and Wife cover Numbers chapter 26: The Numbering of Israel in Moab / The Tribe of Levi / Only Caleb and Joshua Survive; and chapter 27: The Request of Zelophehad's Daughters / Moses Appoints Joshua as His Successor. T...

Husband and Wife answer questions about this god Ba'al and that god Ba'al and those gods Baal and Zeus and Yahweh and rain and candles and somebody fucked a bull and I don't even know. Thank you for stopping by Sacrilegious D...