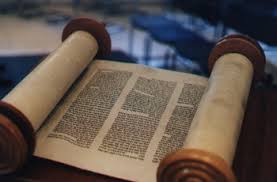 The Torah (/ˈtɔːrə, ˈtoʊrə/; Biblical Hebrew: תּוֹרָה‎ Tōrā, "Instruction", "Teaching" or "Law") is the compilation of the first five books of the Hebrew Bible, namely the books of Genesis, Exodus, Leviticus, Numbers and Deuteronomy.[1] In that sense, Torah means the same as Pentateuch or the Five Books of Moses. It is also known in the Jewish tradition as the Written Torah (תורה שבכתב, Torah She’bichtav). If meant for liturgic purposes, it takes the form of a Torah scroll (Sefer Torah). If in bound book form, it is called Chumash, and is usually printed with the rabbinic commentaries (perushim).

At times, however, the word Torah can also be used as a synonym for the whole of the Hebrew Bible or Tanakh, in which sense it includes not only the first five, but all 24 books of the Hebrew Bible. Finally, Torah can even mean the totality of Jewish teaching, culture, and practice, whether derived from biblical texts or later rabbinic writings. The latter is often known as the Oral Torah.[2] Representing the core of the Jewish spiritual and religious tradition, the Torah is a term and a set of teachings that are explicitly self-positioned as encompassing as many as 70 or potentially infinite faces and interpretations, making an unequivocal definition of Torah impossible.[3]

Common to all these meanings, the Torah consists of the origin of Jewish peoplehood: their call into being by God, their trials and tribulations, and their covenant with their God, which involves following a way of life embodied in a set of moral and religious obligations and civil laws (halakha). The "Tawrat" (also Tawrah or Taurat; Arabic: توراة‎) is the Arabic name for the Torah within its context as an Islamic holy book believed by Muslims to be given by God to Prophets among the Children of Israel, and often refers to the entire Hebrew Bible.

In rabbinic literature, the word Torah denotes both the five books (תורה שבכתב "Torah that is written") and the Oral Torah (תורה שבעל פה, "Torah that is spoken"). The Oral Torah consists of interpretations and amplifications which according to rabbinic tradition have been handed down from generation to generation and are now embodied in the Talmud and Midrash. Rabbinic tradition's understanding is that all of the teachings found in the Torah (both written and oral) were given by God through the prophet Moses, some at Mount Sinai and others at the Tabernacle, and all the teachings were written down by Moses, which resulted in the Torah that exists today. According to the Midrash, the Torah was created prior to the creation of the world, and was used as the blueprint for Creation. The majority of Biblical scholars believe that the written books were a product of the Babylonian captivity (c. 6th century BCE), based on earlier written sources and oral traditions, and that it was completed with final revisions during the post-Exilic period (c. 5th century BCE).

Bible Study for Atheists Weekly is a collection of last week's episodes by Sacrilegious Discourse with Husband and Wife. This week's collection includes Post Deuteronomy Bonuses --- Send in a voice message: https://anchor....

Husband and Wife attempt to cover a brief summary of the Pentateuch, but it ran long, so here is Part 2: Leviticus, Numbers, and Deuteronomy. And thus we have completed our reading of the first five books of the Bible! W00t! ...

Husband and Wife attempt to cover a brief summary of the Pentateuch, but it ran long because Wife did too good a job. Here's Part 1: Genesis & Exodus. Join us tomorrow for Leviticus, Numbers, & Deuteronomy. --- Send in a v...

Bible Study for Atheists Weekly is a collection of last week's episodes by Sacrilegious Discourse with Husband and Wife. This week's collection includes Deuteronomy Chapters 30 - 34 and our Weekly Q&A. --- Send in a voice ...

Husband and Wife cover questions about the Thummim and Urim, which sadly have nothing to do with either thumbs or urine. We get furthering confirmation that those silly Bible goobers believed in magic. You know, because a bel...

Husband and Wife cover Deuteronomy chapter 34: The Death of Moses. And with that the baton is passed to Joshua, Deuteronomy is done, the Pentateuch is history, and we are ready to move into... more Bible. But not before a wee...

Husband and Wife cover Deuteronomy chapter 33: Moses Blesses the Tribes of Israel. Some blessings are better than others, a few blessings are subpar, and Dan's blessing is missing altogether. The best blessing was Reuben's: b...

Husband and Wife cover Deuteronomy chapter 32: The Song of Moses / Moses Permitted to See the Land of Canaan. It's our musical debut! Every good show has one! Sing along, you guys! It's a regular hootenanny! Also Moses gonna ...

Husband and Wife cover Deuteronomy chapter 31: Joshua Commissioned as Moses' Successor / The Law to Be Placed in the Ark / The Song of Moses. God reveals that like two seconds after Moses dies, the dumbos will start worshippi...

Husband and Wife cover Deuteronomy chapter 30: The Conditions for Restoration and Blessing. God commands us to love him, which seems like a flawed plan. But if you disobey, you'll have to eat a baby sandwich on suffer bread. ...

Bible Study for Atheists Weekly is a collection of last week's episodes by Sacrilegious Discourse with Husband and Wife. This week's collection includes Deuteronomy Chapters 25 - 29 and our Weekly Q&A. --- Send in a voice ...

Husband and Wife cover questions about why a woman would pull off her brother-in-law's sandal. We also question whether spit = semen. Pretty sure it does NOT but it's the bible so who tf even knows? --- Send in a voice me...

Husband and Wife cover Deuteronomy chapter 29: The Lord's Covenant with Israel in Moab. It's just more of the same "I'll boil you alive" threats if the people disobey. Wife channels her inner Mickey Mouse, and does a quick de...

Husband and Wife cover Deuteronomy chapter 28: The Blessings of Obedience / The Consequences of Disobedience. Holy moly, this god is on a serious tear! He threatens to make you eat your kids and get boils everywhere and be na...

Husband and Wife cover Deuteronomy chapter 27: The Law to Be Recorded on Mount Ebal / The Curses at Mount Ebal. After making a zen garden by balancing stacked rocks, these fools shout curses that involve way too many rules ab...