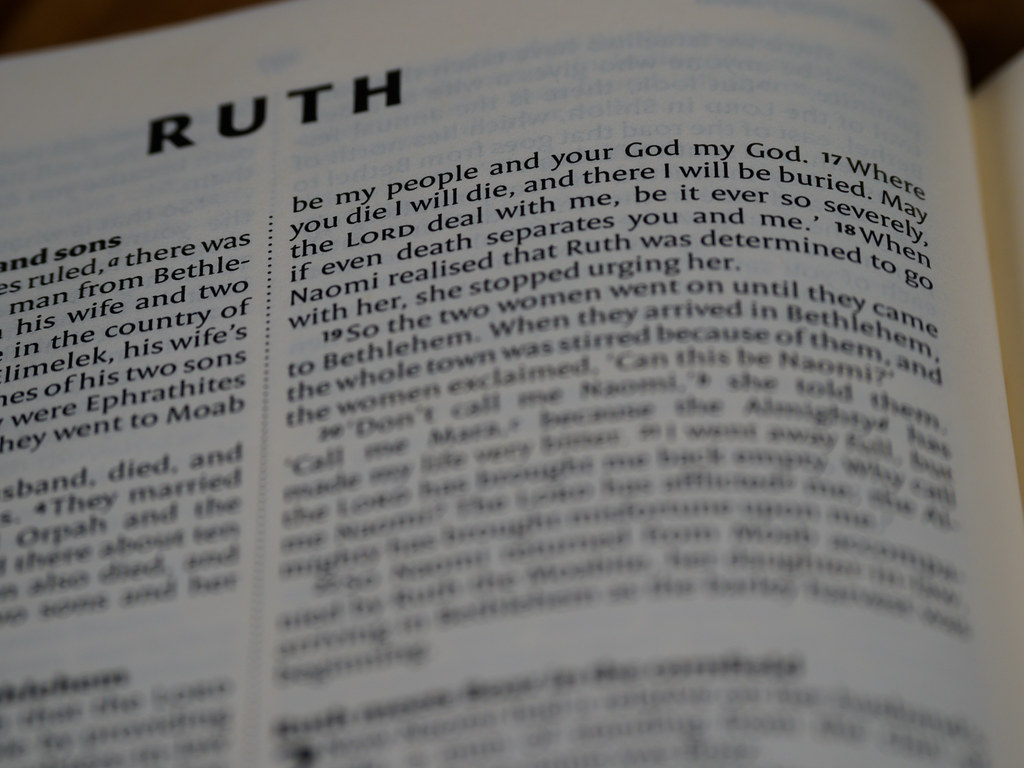 The Book of Ruth (Hebrew: מגילת רות, Megilath Ruth, "the Scroll of Ruth", one of the Five Megillot) is included in the third division, or the Writings (Ketuvim), of the Hebrew Bible. In most Christian canons it is treated as one of the historical books and placed between Judges and 1 Samuel.

The book, written in Hebrew in the 6th–4th centuries BC, tells of the Moabite woman Ruth, who accepts Yahweh, the God of the Israelites, as her God and accepts the Israelite people as her own. In Ruth 1:16–17, Ruth tells Naomi, her Israelite mother-in-law, "Where you go I will go, and where you stay I will stay. Your people will be my people and your God my God. Where you die I will die, and there I will be buried. May the Lord deal with me, be it ever so severely, if even death separates you and me."

The book is held in esteem by Jews who fall under the category of Jews-by-choice, as is evidenced by the considerable presence of Boaz in rabbinic literature. The Book of Ruth also functions liturgically, as it is read during the Jewish holiday of Shavuot ("Weeks").

Bible Study for Atheists Weekly: Ruth Chapters 1 - 4 with Q&A and Ruth Wrap Up

Bible Study for Atheists Weekly is a collection of last week's episodes by Sacrilegious Discourse with Husband and Wife. This week's collection includes Ruth Chapters 1 - 4 our Weekly Q&A and the wrap-up for Ruth. --- Send...

Husband and Wife cover the Book of Ruth and learn about Oprah, lesbian icons, and some crazy fanfic about a certain giant's ancestry. Wife is a bit manic in this one and spills some juicy hot goss. Oh, and FYI: feet = dicks. ...

Husband and Wife cover Ruth chapter 4 (*spoilers, Darling*): Boaz Marries Ruth. After purchasing his newest bride, he instantly impregnates her. Their son is supposed to be super famous but like I already can't even remember ...

Husband and Wife cover Ruth chapter 3: Ruth and Boaz at the Threshingfloor. Naomi was like, "Gurl, wash your face, so I can sell you." And Ruthie got all dolled up for good prostituting and she won! After trying her out for h...

Husband and Wife cover Ruth chapter 2: Ruth Gleans in the Field of Boaz. The barley party is in session! And Ruth doesn't even get raped, in spite of the fact that she's a Moabite! Bootstraps are fully engaged and Ruth is wor...

Husband and Wife cover Ruth chapter 1. Naomi loses her husband and sons, but one of her daughters-in-law, Ruth, travels with her to a barley party. We're more cilantro-centric, but whatever gets you there. --- Send in a vo...